Robots aren’t really my thing at all, so when my son brings me a book titled Robots At Your Service and says, “I really think you should read this” I’m utterly confused. But since it looks short, I tell him it’ll be my bedtime read that night and we’ll talk about it tomorrow. 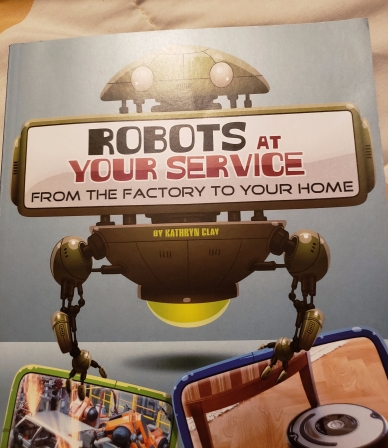 Here’s the thing, as odd as I thought the choice was for me, I realize that my child is also giving me an opportunity to have a conversation with him. Right now he still wants to tell me everything, but I know there’s a chance the day will come where puberty, hormones, or just general teenager-ness will change that. So the fact that he’s inviting me to converse with him, and about a book no less, is something that I’m taking full advantage of. If I can make talking about books a “thing” now, then that may still be a thing in the future. I share all this to say, as you are #raisingreaders, if you have a child wanting you to read or just to talk to you about their book, go for it!

Additionally, did you know that scientists/inventors are trying to create microbots that can go inside a human’s body to figure out what’s wrong with them? Me either, but thanks to my son, I learned about it through this book! 🙂

2 replies on “Since He Asked Me To Read It…#RaisingReaders”

I miss those days Deana. My children now range between teenage and young adult. Neither if them get excited about reading with me anymore. Sometimes though, my oldest daughter and I will read the same comics and can discuss those. I’ll take what I can get.

Other posts from Raising Readers